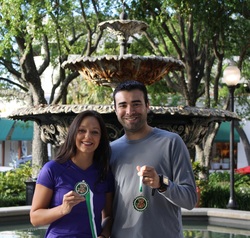 Tampa, FL, March 18, 2013: Local Tampa race directors Beth Shaw and Benjamin Mena donated $50,125 today to the Sandy Hook School Support Fund, a fund established by United Way of Western Connecticut in partnership with Newtown Savings Bank in the wake of the tragedy of December 14. This donation is made up of contributions and registrations of a virtual half marathon and 5K named Sandy Hook Elementary Memorial Virtual Half Marathon and 5K.

Though the virtual run began as a small way for those local to Tampa to help the Sandy Hook community, the race directors soon found that the event’s facebook page had gone viral and they had participants from all over the globe.

“We were astounded at the amount of people who registered and wanted to help. We didn’t forsee it
growing so large and we’re so happy we could give people an opportunity to help,” said Shaw.

Virtual races have sprung up all over the country and allow runners and walkers to participate in an event
wherever and whenever they like. PDF race bibs are emailed out and printed by participants who then go
on an honor system to complete the run. Race participants were given the option to receive a medal via
mail or have their full registration fee go to the charity.

“We had to cap the medals at 1,500 because it was huge task to get them all mailed out. Even with the
1,500 cap we had people register who didn’t care about the medal and put all of their registration fee
toward donation. It’s an amazing thing to see all of these people come together to support the community
of Newtown,” said Mena.

In addition to the registration fees of the over 2,500 participants, an additional $4707.72 was raised by those
who wanted to give even more.

“This was more about the show of support and donations than the run itself. The medals are so special and
they serve as a reminder of the lives that were lost in Newtown,” said Mena.

The United Way of Western Connecticut has seen a show of support from around the country and worked
with a special transition team to create a foundation that will distribute the funds. All dollars donated are
being used for the short-term and long-term recovery of the people of Newtown and Sandy Hook.

”We are humbled by the outpouring of support from across the country and around the world and are
grateful to such caring individuals as Beth Shaw and Benjamin Mena for stepping forward to aid in the
healing and recovery of our community,” said Kim Morgan, CEO of United Way of Western Connecticut.
“On behalf of the Newtown community, I’d like to thank all who participated in this incredible event.”

Beth Shaw and Benjamin Mena have also directed the Shape Up for Summer 5K and are currently working
on the upcoming Tampa Corporate 5K located at Curtis Hixon Park on April 11, 2013. For more information
on the Tampa Corporate 5K go to www.tampacorporate5K.com or email them at menashawraces@gmail.com.